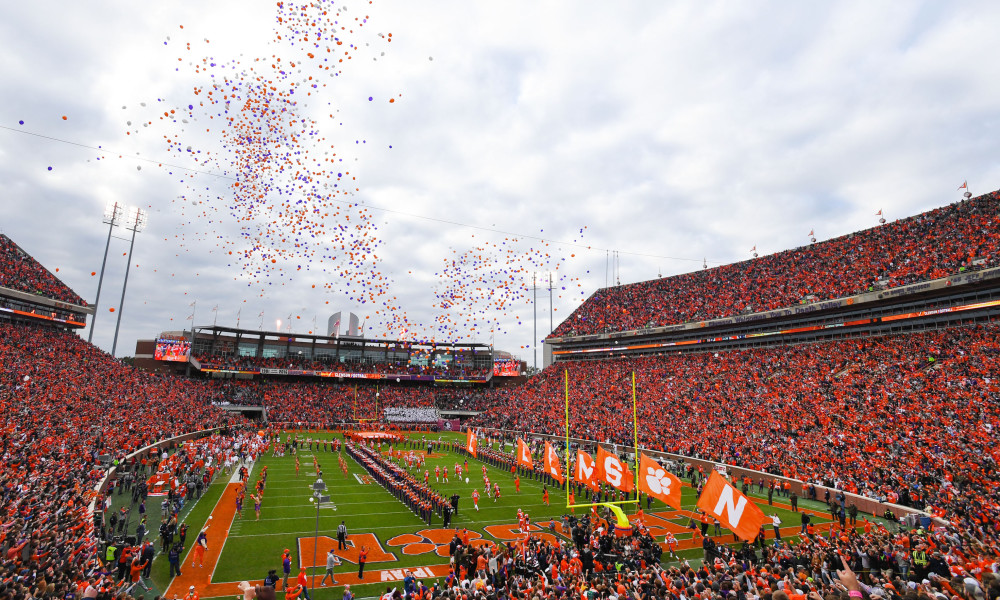 The Clemson Memorial Stadium is the home Clemson Tigers, an NCAA Division I FBS football team located in Clemson, South Carolina. It was built in 1941–1942. Prior to the completion of Bank of America Stadium, in Charlotte, Death Valley served as the home venue for the National Football League (NFL)’s Carolina Panthers during the team’s inaugural 1995 season. Currently, the stadium is the largest in the Atlantic Coast Conference(ACC).

The seemingly gloomy nickname “Death Valley” for Memorial Stadium was named by Clemson Head Coach Frank Howard began using the nickname in the 1950s. It is said that the nickname derives from Death Valley National Park in California and the location of the Clemson University cemetery on a hill that once overlooked the field.

The Clemson Memorial Stadium has no lack of memorable games played for collegiate football. One of the most notable games took place on 8th November 2003. Clemson shocks third-ranked Florida State University by 26–10. Another mentionable game was held on 23 October 1999, where Clemson hosts first-ranked Florida State for the first ever father/son head coach face off. Despite a close game, Bobby Bowden’s Seminoles were too much for Tommy Bowden’s Tigers. FSU secured a very slim win (17–14) over the Tigers. The 1999 game marks Clemson’s single-game attendance record. The stadium’s maximum capacity is 81,500 but has seated crowds as large as 86,092 that year. FSU is the highest-ranked team the Tigers had beaten until the 2016 game against Louisville.

Other than collegiate sporting events, the Death Valley has its fair share of hosting concerts. Clemson Memorial Stadium hosted The Rolling Stones with Living Colour (1989), Pink Floyd in (1994). Elton John with Billy Joel (1995), and The Eagles (1996), and U2 (1997).

Known to most fans, the stadium was constructed against the wishes of the late and former Clemson Head Coach, Jess Neely. According to a book titled “Clemson: Where the Tigers Play”,

by Sam Blackman, Bob Bradley, Chuck Kriese, and Will, Head Coach Jess Neely told Frank Howard in 1939, “Don’t ever let them talk you into building a big stadium. Put about 10,000 seats behind the YMCA. That’s all you’ll ever need.”

Despite what was told, the University still decided it was time to build a stadium. They chose to build the football stadium in the western part of the campus. On April 3, 1941, a $150,000 bond issue for the new stadium was authorized by the South Carolina General Assembly. The bill was passed on to Governor Burnet R. Maybank for signature. The cost for the original 20,500 seat stadium—the lower half of the current facility’s south grandstand—was at $125,000. The stadium was designed by a 1908 Clemson alumni, Carl Lee of Charlotte, N.C., and Professor H. E. Glenn of the engineering faculty. Initially, most of the construction of the stadium was done by scholarship athletes to reduce cost. The first staking out of the stadium was done by A. N. Cameron and Hugh Webb, two elite members of the football team. Even the seeding of the field was done by a crew of 40 together with Howard for three weeks and three days. Howard paid those who helped on the field and treated them to 50 gallons of ice cream once it was completed. On September 19, 1942, Memorial Stadium was christened with a 32-13 victory over Presbyterian College.

Since its opening in 1942, the stadium has seen plenty of expansions. The most recent expansion would be the West Zone, which began in 2004 and was completed in 2006. Other constructions were made from 1958 all till 2009.

Later, on January 14, 2011, Clemson announced a new $50 million athletic building plan. Facility improvements for football will include building an indoor practice facility and finishing the WestZone project. The indoor practice facility, which will be located where the current practice fields are, will feature a regulation-size artificial turf football field, a coach’s tower, and video platforms. The building will have large garage-style doors, which can be raised to create an open-air space. The estimated cost of the project is $10 million. “The indoor practice facility will be a highly significant addition for Clemson, not only for football but also for other sports to use,” Phillips said. The $15.3 million WestZone project will feature the oculus, which is the main entrance to the WestZone, a four-level museum and an expansion of the northwest concourse. Construction on the northwest concourse expansion started in April and was completed by the start of the 2011 season.

Some of the traditions that fans can look out for when you are at a Clemson Tigers game are:

A rock was presented to the then head coach, Frank Howard, by his friend, Samuel Columbus Jones in the early 1960s. Jones said to Howard, “Here’s a rock from Death Valley, California, to Death Valley, South Carolina.”

Howard didn’t assume much about the rock thus, he used the gifted rock as a doorstop in his office for several years. It was only in September 1966, while cleaning out his office, Howard noticed the rock again. At that time, he told IPTAY executive director Gene Willimon, “Take this rock and throw it over the fence or out in the ditch…do something with it, but get it out of my office.” Willimon had the rock placed on a pedestal at the top of the east endzone hill that the team ran down to enter the field for games.

On September 24, 1966, the first time Clemson players ran by the rock, they beat conference rival Virginia, 40-35 and it almost seems like Howard had an epiphany about the rock when they won. He seized on the motivational potential of “The Rock” by telling his players, “Give me 110% or keep your filthy hands off of my rock.” The team started rubbing the Rock for the first game of 1967. The extra Rock motivation may have helped as they beat ACC foe Wake Forest, 23-6 that year.

It is now a tradition for the Clemson Ranger Club to “protect” the Rock 24 hours prior to the Clemson-South Carolina game when held in Death Valley. The ROTC cadets keep a steady drum cadence around the Rock, which can be heard across the campus. Part of the tradition began after unknown parties vandalized the Rock prior to the 1992 game. Again, in 2013, the rock was vandalized and re-installed under a protective case.

Running Down the Hill

The Clemson football team is known for its dramatic entrance. The tradition of Running Down the Hill started when the football locker rooms were located in Fike Field House, which is located up the hill northeast of the stadium. Clemson players would actually “run down the hill” all the way from Fike into the stadium. It is said that the run is to intimidate opposing teams.

Today, after exiting the stadium on the west side, the players load into two buses which making their way around the stadium to the east side where The Hill is located. This scene has been shown to attendees using the JumboTron ever since it was installed in the stadium. As the players get out and gather at the top of the hill and stand around Howard’s Rock, the touchdown cannon sounds, the band launches into Tiger Rag, and the players run down the hill.

The Tigers had made the run down the hill 395 times by the end of the 2017 season. In 1985, Brent Musburger referred to it as “the most exciting 25 seconds in college football.”

For further information on the Clemson Memorial Stadium at Clemson University, visit the pages listed below.